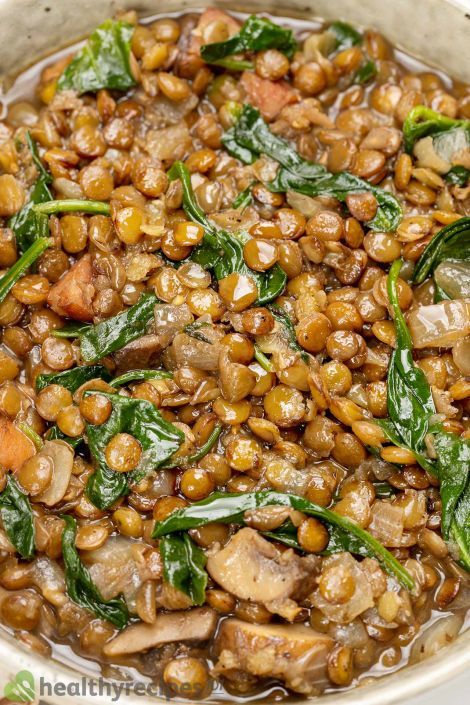 This hearty lentil soup with spinach and sausage recipe includes baby carrots, fire-roasted diced tomatoes, Italian sausage, and spinach. As lentils are rich in taste and hold their shape well when cooked, this soup is no doubt a perfect choice for a sumptuous weekend dinner.

What Is a Lentil?

Lentils are a member of the legume family and belong to the same group as beans and peas. Their lenticular seeds grow in pods (usually two seeds per pod).

Lentils originated in Asia and North Africa, and are now mainly produced in Canada and India. To date, they are a common pantry item and also one of the oldest cultivated legumes in the world.

Lentils are known for their delicate and earthy taste, making them the first choice for various dishes. They’re budget-friendly, cook quickly, and require no soaking— you can easily mix lentils into curries, soups, stews, or sauces.

Lentils are a high-quality, plant-based protein source. They’re extremely low in fat and rich in fiber.

Lentils have both soluble and insoluble fiber, as well as complex carbohydrates, which can release glucose slowly and stably. The glycemic index of lentils is very low, only 32±5, making them an excellent aid for weight loss.

Thanks to their high soluble fiber content, lentils can help stabilize blood sugar, reduce blood cholesterol, and prevent constipation and other digestive issues.

Lentils are also a nutritious, versatile, and easy-to-use meat substitute. They contain other nutrients that include calcium, iron, folic acid, and many vitamins and minerals.

Lentils are sold both canned and dried. While canned lentils can be used for quick salads or side dishes, dried ones are more suitable for soups and stews.

Brown lentils are the most common variety. Their color usually ranges from khaki brown to dark black, and come with a mildly earthy taste.

Brown lentils easily maintain a good shape during cooking and are suitable for hot casseroles, soups, and stews. They also work well in vegetarian burgers or vegetarian patties.

Brown lentils are like the all-purpose legume. They are commonly used in North America as either a main ingredient or thickening agent.

Generally, the color of red lentils ranges from golden yellow to orange and red. These slightly sweet and nutty legumes are common in Indian and Middle Eastern cuisine such as daal.

Due to their “split” nature, this type of lentil disintegrates during cooking. When the skin of the red lentils cracks, it quickly decomposes and becomes a paste.

This is how they’re used as a thickener in soups, pureed vegetables, stews, casseroles, or any other puree dishes. Whenever you want a thick, soothing paste, red lentils will be a perfect choice.

Green lentils are very similar to brown lentils, but have a more intense taste. They vary in size and color, ranging from light or spotted green to green slate with hints of blue and black.

Like red lentils, green lentils tend to split and fall apart when cooked. They are known for the best texture and flavor of all the lentils, which make them the most expensive.

Because of their peppery taste, green lentils are particularly effective in salads, or can be used as a warm side. Among the lentil varieties, green lentils take the longest to cook (about 45 minutes).

Usually, a bowl of dried lentils equals about two and a half cups cooked. Don’t skip rinsing and sieving the lentils before cooking, or else small stones or crumbs might not be removed completely.

If you like a lighter-tasting soup, consider using chicken or turkey smoked sausage, or kielbasa. To make it more economical, use leftover diced ham instead of sausage.

For a vegetarian soup, skip the sausage and use salt-free vegetable soup. If you need greater depth, adding a spoonful of white miso will help.

Spinach starts losing its bright color after exposure to room temperature. So, it’s best to add it to the soup in the last minutes to maintain its color.

How to Make Lentil Soup

This lentil soup with spinach and sausage recipe adapts a simple cooking method with the engagement of fresh produce and takes a few simple steps to make.

Sear the sausage in olive oil in a cast-iron skillet.

Scoop out into serving bowls and enjoy hot.

What Else Goes with Lentil Soup?

Lentil soup with spinach and sausage can be made in big batches since the rest can be saved for the next day. It pairs wonderfully with many other ingredients, as suggested below.

Cooking lentil soup with chicken can reduce the amount of sodium and also makes it remarkably lighter in taste.

This lentil soup with spinach and sausage can be enjoyed with freshly baked cornbread or southern buttermilk biscuits. You can also pair it with crispy French bread.

Recipes Similar to This Lentil Soup with Spinach and Sausage 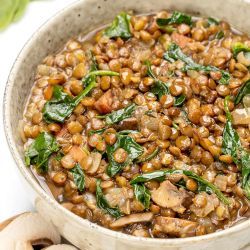 PRINT RATE Share on Facebook Share on Twitter Share on Pinterest
This lentil soup with spinach and sausage recipe produces servings for four, so you can store smaller portions of it in the fridge for later use. As sausages can freeze well, you can also consider use half of the sausage first and save half to cook a fresh batch of soup later.
Prep Time 5 mins
Cook Time 40 mins
Total Time 45 mins
Course Side Dish, Soup
Cuisine American
Servings 4 Servings
Calories 250kcal

Yes, this lentil soup with spinach and sausage can promote weight loss.

Lentils have both soluble and insoluble fiber, as well as complex carbohydrates, which can release glucose slowly and stably. The glycerol blending index of lentils is very low, only 32±5, which is an excellent aid for weight loss.

Yes, this lentil soup with spinach and sausage is gluten-free.

3. How Long Does Lentil Soup Last?

Lentil soup with spinach and sausage is suitable for meal prep. You can easily make the soup in advance and save it for the next lunch.

Simply store the leftovers in a container, seal it tightly, and put it in the fridge. Microwave it to reheat whenever you’re ready to serve again.

4. Can You Freeze Lentil Soup?

Yes, lentil soup can be frozen. This recipe produces servings for four, so you can store smaller portions of it in the fridge for later consumption.

As sausages can freeze well, you can also consider using half of the sausage first, and save the other half to cook a fresh batch of soup later. 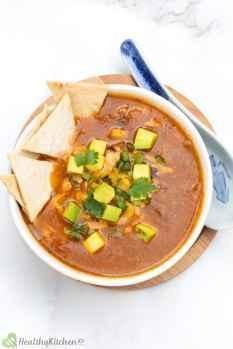 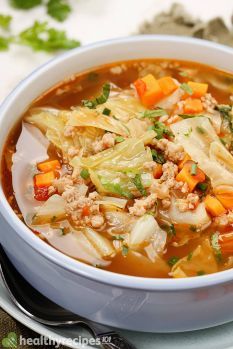 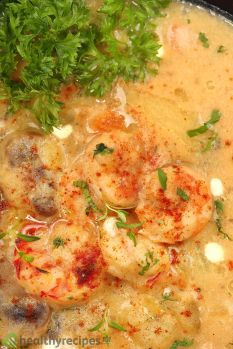 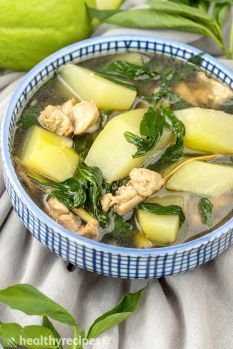 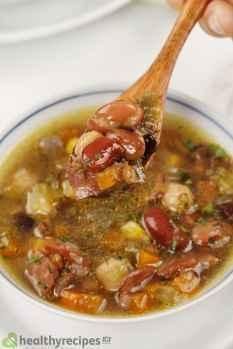 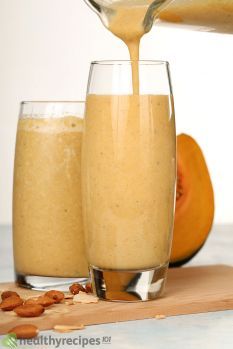 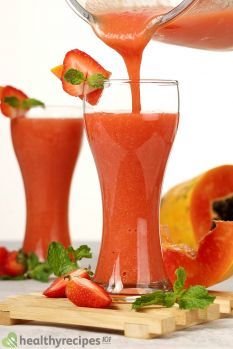