Today’s eggplant parmesan recipe is a vegetarian mash-up idea for the well-known chicken parmesan and lasagna.

The preconceived notion of eggplant has been a bland, soggy, and slimy vegetable. Much to your surprise, this eggplant parmesan has changed minds among our friends more than once.

For those who have never developed a love for eggplant, you really need to give eggplant parmesan a shot. It’s crispy, cheesy, and delicious— ready to get people to open their hearts for a dish with eggplant as the main ingredient.

Is Eggplant a Fruit?

Yes, eggplant is a fruit.

Much to your surprise, eggplant is categorized as a berry. It belongs to the nightshade family and is a relative of tomatoes, potatoes, paprika, and also cayenne pepper.

Eggplant contains small, edible seeds, and is widely known for a slightly bitter taste and a spongy texture. The fruit of the eggplant is a shiny, egg-shaped fruit— usually with a deep purple shade that most people associate with it.

In addition to that, eggplant also comes in various sizes and colors such as green, lavender, orange, white, and yellow. All varieties of eggplant are significantly low in calories, fat, sodium, and cholesterol.

What Is Eggplant Parmesan?

Eggplant parmesan is a casserole dish that consists of sliced eggplant breaded, pan-fried, and baked with marinara cheese. Its origin is still in dispute— most people believe it has relations to either Parma, Sicily, or Naples in Italy.

Providing 466 calories per serving, eggplant parmesan can be served as a healthy, nutritious, and fulfilling breakfast. It’s also vegetarian with no meat included, and contains only 206mg of sodium.

Another casserole dish that’s also vegetarian and packed with greens is ratatouille. We believe it’s a more appropriate choice for people who are following a Keto or low-carb diet.

How to Cut an Eggplant for Eggplant Parmesan?

You know what they say, great food comes from great ingredients. So, first, make sure to purchase vibrantly colored eggplants with shiny, taut skins.

Like most fruit peels, the peel of an eggplant is edible. To peel or not to peel, that depends on the plant size.

Large and mature eggplants usually have a really thick and tough outer layer. Though their outer layer is still edible, it’s a bitter part that nobody enjoys chewing.

Therefore, if you choose large eggplants, we suggest you peel them beforehand. Smaller eggplants do just fine in the frying pan without being peeled.

After you cut off both ends of the eggplant, start slicing it into even slices, and keep it up all the way through. Here, we cut the eggplant into 1/4 inch-thick pieces, which we believe is the perfect thickness for eggplant parmesan.

How to Make Eggplant Parmesan

Heat 2 tablespoons of olive oil in a skillet over medium heat. Add onion and garlic, and stir for 5 minutes.

Prepare three large, shallow plates, the first with flour, the second with beaten eggs, and the third with the breadcrumbs and parmesan cheese. Dredge each eggplant slice successively in the three mixtures. Work with one slice at a time.

Add 1/2 cup of olive oil to a non-stick pan and turn on medium heat. Once the oil is simmering, fry all the coated eggplant until slightly golden on both sides. Transfer to a wire rack lined with paper towels to drain excess oil.

Spread one-third of the marinara sauce evenly over the bottom of a casserole dish. Place half of the fried eggplant on it. Sprinkle half of the chopped basil and half of the mozzarella cheese onto the first layer of eggplant.

There are several ways to prevent eggplants from absorbing too much oil. One way is to keep a close eye on the heat and the frying time.

If the heat is too high or too low, the eggplant will start to absorb more oil than it needs. You need to add the eggplant in right after the oil starts to simmer (but is not smoking hot).

Don’t fry the eggplant slices for too long; instead, remove them immediately as they start to turn slightly golden. You’ll have more time to cook them later in the oven.

After you’ve finished cooking, use a paper towel to drain excess oil from the fried eggplant slices. By doing so, they won’t turn soggy right away when exposed to the air throughout your meal.

You can make eggplant parmesan ahead of time, but note that you’ll run the risk of producing a slightly soggy eggplant.

To prepare eggplant parmesan ahead of time, all you need to do is assemble all ingredients in the casserole dish with marinara sauce. Next, cover it tightly with cling film and place in the refrigerator.

Glass or ceramic cookware can sometimes crack under sudden heat changes (from low to high temperature). Therefore, you need to let it cool down completely before reheating it in the oven.

What Goes with Eggplant Parmesan

Eggplant parmesan is favorable among vegetarians as it’s hearty and delicious with a meat-like taste. Aside from eggplant, here are the important ingredients that give the dish its remarkable texture and flavor.

In this recipe, we use both mozzarella and parmesan cheese (also known as Parmigiano-Reggiano).

Parmesan cheese is mixed with the breadcrumbs, and together, they develop a golden crust after deep-frying in the pan. Mozzarella cheese, on the other hand, is sprinkled on top and between the layers of eggplant to create the ooey-gooey melting effect.

You can also purchase a big piece of fresh cheese and grate or shred it yourself. By doing so, you’ll get more of the original flavors while keeping your meals budget friendly.

Flour and eggs are the two binding ingredients that cannot be left out of this eggplant parmesan. The eggs help bind the breadcrumb mixture to the eggplant, and the flour helps glue the eggs to the slices.

We also have this healthy casserole recipes. They are easy to follow and complied with our healthy eating standards.

How Long Does Cooked Eggplant Last?

If you want to save time preparing eggplant parmesan by frying the eggplant beforehand, it’s necessary to know how long it can stay in the fridge.

In particular, cooked eggplant can retain good quality for up to 5 days in the refrigerator. However, if the recipe requires breading the eggplant, then the outer crust will turn soggy.

Therefore, we highly recommend you prepare this eggplant parmesan as explained below.

Can You Freeze Eggplant Parmesan?

Yes, you can. To freeze eggplant parmesan, simply put the casserole dish that contains the leftovers into the freezer.

Before reheating, you’ll need bring it to room temperature and preheat the oven in the meantime. Make sure you let it thaw completely before popping it in the oven, otherwise, it will be melting and soggy.

One more important note: It’s absolutely a no to freeze the uncooked casserole dish. The thawing (or, in other words, melting) process will make all the raw ingredients completely waterlogged.

What to Serve with Eggplant Parmesan

Eggplant parmesan itself is already a nutritious make-ahead breakfast. However, if you’re looking for something else to side with this dish and create a complete meal, here’s some suggestions.

Pasta earns its love and fame in part thanks to its convenience. You simply cannot go wrong when serving pasta with any Italian dish.

If you’re afraid of consuming that many carbohydrates for breakfast, consider replacing the traditional pasta with zucchini noodles. Or, feel free to enjoy it with some simple broiled veggies for more fiber.

A sweet and vibrant carrot orange ginger juice is the drink we chose to pair with this eggplant parmesan. It’s packed with nutrients, vitamins, and aromatic flavors— even more amazing if served cold.

And that’s pretty much everything you need for an energizing start to a new day. Join us next time for more filling meals! 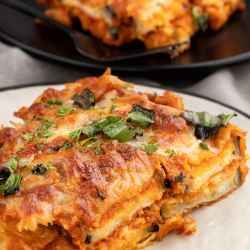 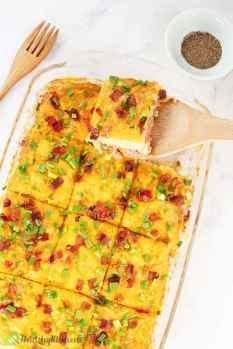 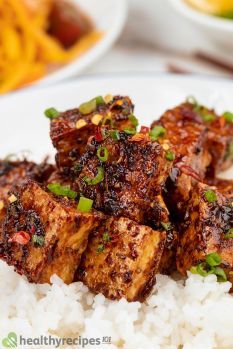 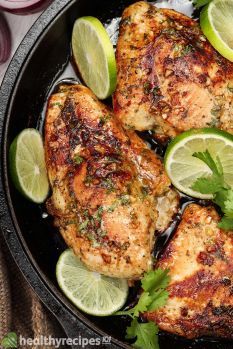 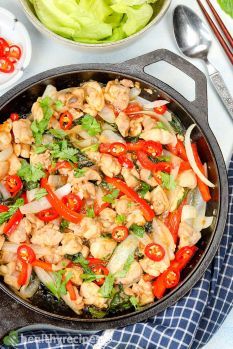 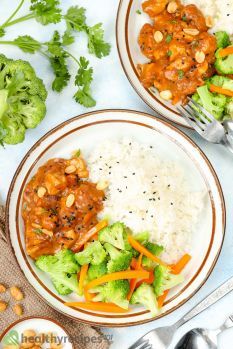 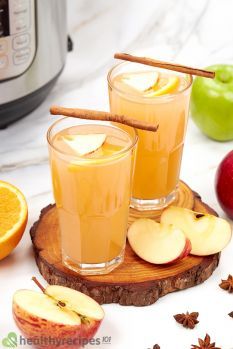 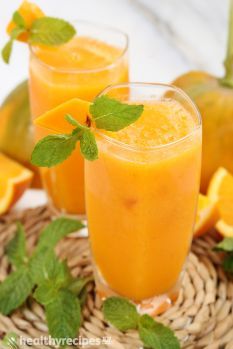 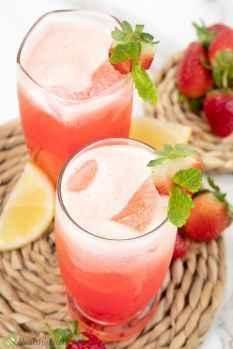 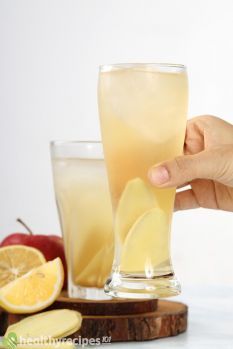 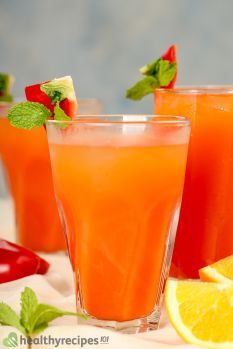